According to the DSM-IV,1 panic disorder (PD) is a unitary diagnostic category. Nevertheless, within this category, there are diverse clinical presentations, leading to concerns that PD is not a singular diagnosis.2 As a response to these concerns, alternative classification schemes have been devised.2 Authors have proposed that the subtypes should be defined by the most prominent symptoms during a typical panic attack (PA), such as respiratory, cardiovascular, and gastrointestinal subtypes.3 Respiratory abnormalities, such as increased sensitivity to CO2, are associated with PD, and there may be a connection between the respiratory subtype of PD and these abnormalities.4,5

Klein6 proposed that spontaneous PAs occur when the brain's suffocation monitor erroneously signals a lack of useful air, maladaptively triggering an evolved suffocation alarm system. Such a dysfunction would make an individual vulnerable to "false suffocation alarms", namely, PAs. Respiratory tests have been fruitful in generating hypotheses about PD,6,7 indicating that CO2 sensitivity may be part of a hypersensitive suffocation detector.6 PD patients exhibit both behaviorally and physiologically abnormal responses to respiratory challenge tests.8,9 The CO2 inhalation increases pCO2 and reduces pH in the blood, changes that are also observed in the brain.10 Some regions of the brain that are sensitive to H+/CO2 have been implicated in both ventilation control and defensive behaviors, including panic. The increase of CO2 and H+ in the brain may activate these structures, inducing PAs and increasing ventilation.10

The administration of 1 or 2 vital capacity breaths of a 35% CO2/65% O2 mixture to patients with PD is a brief but intense stimulation, accompanied by neurovegetative symptoms similar to real-life PA symptomatology.11,12 These respiratory tests induce dose-dependent anxiety and panic symptoms in many subjects with and without PD,10,13,14 but in PD patients, this response is significantly more intense.11,12,15 In addition, healthy first-degree relatives of PD patients react significantly more to CO2 inhalations than do healthy subjects without a family history of PD.16 The research on CO2 challenge tests strongly suggests a relationship between the pathophysiology of PD and some disturbance in breathing control.4,11 Recent studies indicate that patients with the respiratory subtype of PD are more sensitive to 35% CO2 challenge tests and hyperventilation tests than subjects without this subtype.17-19 Hypersensitivity to CO2 and prominent respiratory symptoms might be markers for genetic vulnerability to respiratory PD.5,16

Briggs et al.20 defined the respiratory subtype of PD as a distinct subgroup of PD patients with prominent respiratory symptoms. Respiratory subtype patients are more likely to have a family history of PD and exhibit low comorbidity with depression, longer illness duration and low neuroticism scores.5 These patients also exhibit higher scores on PD severity scales, and the improvement with pharmacological treatment is observed more quickly than in patients without this subtype.20,21 Controversial findings also exist regarding the respiratory subtype, such as the correlation with the age of onset, tobacco and alcohol use.5

The prevailing systems of classification of psychiatric disorders assume that the categorical representation is appropriate; disorders are laid out as distinct types and diagnosed as present or absent. However, some authors propose that dimensional taxonomy should be used in at least some conditions.25 Studies indicate that dimensional constructs may be superior to categorical classifications because in addition to capturing the core symptoms, dimensional constructs capture the subtle psychopathology of anxiety disorders.25,26 Dimensional variation exists between and within categories, and quantitative variation can be simplified into categorical distinctions,25 such as the respiratory subtype.

In the current study, a database from a previous research project27 was used. Patients with a diagnosis of PD with agoraphobia were consecutively recruited as they presented to the Laboratory of Panic and Respiration at the Institute of Psychiatry of the Universidade Federal do Rio de Janeiro, Rio de Janeiro, Brazil. The data collection for the original study lasted for approximately six months. After subjects received a clinical diagnosis of PD, made by an expert psychiatrist, they were interviewed by a second psychiatrist with the Structured Clinical Interview Diagnostic28 for DSM-IV.1 If the two clinicians disagreed on the diagnosis, they met to confer. If a consensus on the diagnosis could not be reached, the subject was not enrolled. Patients who met the DSM-IV criteria for current major depression, bipolar disorder, obsessive-compulsive disorder, schizophrenia, delusional or psychotic disorders, organic brain syndrome, severe personality disorder, suicide risk, epilepsy, or substance abuse or dependence (during the previous year) were excluded. Patients with comorbid dysthymia, generalized anxiety disorder, or past major depression were included if PD was judged to be the principal diagnosis. The protocol was explained to the subjects, who signed a voluntary written consent form to participate in the study. The subjects were informed that the procedure was not dangerous, but that anxiety symptoms could occur during the test. Our local ethics committee approved the protocol (approval number CAAE-0008.0.249.000-05, 14/2005), which complied with the principles of the Declaration of Helsinki. The inclusion criteria selected 18 to 55 years of age; both genders; occurrence of at least three PAs in the two weeks before the challenge test day and no use of any psychotropic drugs for at least one week by any subject. Exclusion criteria included unstable medical condition; cognitive-behavior psychotherapy during the study; use of any regular antipsychotic, antidepressant, regular benzodiazepine or non-benzodiazepine anxiolytic medication for four weeks before the use, the use of fluoxetine for five weeks before the test or a positive urine test for benzodiazepines or other drugs before the test. Subjects with a history of respiratory disease and smokers were also excluded. All subjects underwent a physical examination and laboratory examinations to ensure that they were healthy enough to participate in a CO2 challenge test. The patients had no respiratory or cardiovascular abnormalities and were free of caffeine ingestion for one day. All subjects filled out a form with sociodemographic and clinical data, including age, gender, education, occupation, marital status, family history of PD and age of onset of PD. The family members were not examined.

The Subjective Units of Disturbance Scale (SUDS) is a quantitative evaluation method ranging from 0 (no anxiety) to 10 (maximum anxiety).29 The Diagnostic Symptom Questionnaire (DSQ) is a list of 13 PA symptoms adapted from DSM-IV1 in which the presence and level of discomfort of each panic symptom experienced after the inhalations is rated on a 0- (none) to 4-point (very severe) scale, and the total score ranges from 0 to 52.30 Both the SUDS and DSQ were used in the CO2 inhalation procedure. To avoid baseline interference in the quantitative assessment of the SUDS measurements, the percentage of maximum increase or decrease possible in the SUDS score (PMIDPSUDS) was calculated.31 The ∆SUDS was calculated as the difference between the SUDS score after the CO2 inhalation (SUDS2) and the SUDS score before the inhalation (SUDS1). If the ∆SUDS was negative, the PMIDPSUDS was equal to the ∆SUDS divided by SUDS1. If the ∆SUDS was positive, the PMIDPSUDS was equal to the ∆SUDS divided by the difference between the maximum SUDS score (10) and SUDS1.31

During this first visit to our research center, each patient received a diary in which they recorded any PAs that occurred between the screen visit and the visit for the CO2 test one week after. The respiratory ratio was calculated based on the DSQ scores of non-induced PAs registered in the diary. The scores of the respiratory symptoms (fear of dying, chest pain/discomfort, shortness of breath, paresthesias, and feelings of choking) were summed and divided by the total DSQ score for each patient.

Before the inhalations, all subjects were asked to relax for 10 minutes. Respiratory frequency, pulse, and blood pressure were checked, and the measurements were repeated 1 and 5 minutes after the test. Using a double-blind (patient and medical raters) design setup, the patients inhaled the 35% CO2 mixture or atmospheric compressed air, randomly selected with a coin flip by an independent staff member. The same test procedure was repeated after 20 minutes using other gas (i.e., 35% CO2 or compressed air). During the test procedure, the patients exhaled as fully as possible, placed the inhalation mask, took a fast vital capacity breath, held their breath for 8 seconds, exhaled, and repeated the fast vital capacity breath, again holding for 8 seconds. The compliance with the tests was established by the three members of our team who attended present during the tests. Both tests were attended by one medical staff member who dealt with the patient and the gases (independent staff member) and by two test-blind rater psychiatrists. To measure the anxiety level before and after the CO2 inhalation, we asked the subjects to complete the SUDS. The DSQ was also completed after the respiratory challenge.

Based on the DSQ, a CO2-induced PA was defined as the following: (1) the presence of 4 or more DSM-IV PA symptoms, where either the presence or the increase in DSM-IV symptomatology was used for diagnosis; (2) at least one DSM-IV cognitive panic symptom, that is, fear of dying, losing control, or going crazy; (3) the patient's statement that the sensation of panic or fear after the test resembled a spontaneous PA; and (4) an agreement of 2 medical doctors blind to whether the patient was receiving CO2 or compressed air that the patient had a clinical PA. The SUDS scores were not used for diagnosing a PA. All of these criteria were used in the diagnosis of a PA to increase the reliability and clinical significance.

All analyses were two-tailed, and the level of statistical significance was set at 5%. 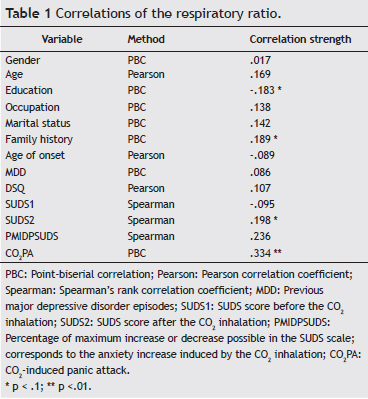 The hypothesis of normality was rejected for PMIDPSUDS (Kolmogorov Smirnov Z, p = .003) and SUDS2 (Kolmogorov Smirnov Z, p < .001), and linear regression based on normality was not possible using these variables. Although it would have been possible to use a nonparametric regression, it would have been difficult for psychiatrists to read. We decided not to base our conclusions on linear regressions.

The patients who suffered PAs after the CO2 inhalation exhibited significantly higher respiratory ratios. The responders were significantly more likely to exhibit a family history of PD, a lower age of onset and a higher prevalence of previous major depression episodes. As expected, the SUDS2, PMIDPSUDS and DSQ were significantly higher for the responders compared to the non-responders. There were no differences in sex, age, education, marital status, or occupation between the groups (Table 2). 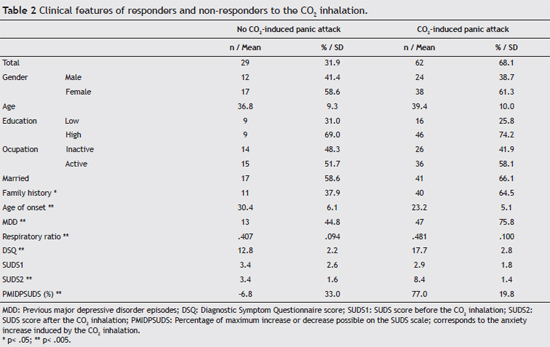 Another interesting finding from the current study is that the responders exhibited a higher family prevalence of PD than did the non-responders. Perna et al.16 described the treatment- seeking PD probands, their first-degree relatives, and the relatives of normal controls. Although relatives with a personal history of any mental disorder were excluded, 22% of those related to PD probands developed a PA after one inhalation of 35% CO2. Fifty-one percent of the PD probands but only 2% of the relatives of normal controls developed PAs as well. Thus, high-risk relatives were significantly less likely to develop PAs with CO2 than were ill probands.16 In a similar study, 44% of the first-degree relatives of PD patients exhibited PAs after one inhalation of 35% CO2, whereas only 12% of the controls exhibited PAs.33 Bellodi et al.34 conducted a twin study that generated strong evidence for the role of genetic factors in the sensitivity to CO2 inhalation. If it could be established that an abnormal sensitivity to CO2 comprises a marker for PD, the test could be used to identify individuals with a relatively high risk for the onset of spontaneous PAs.

The main limitations of this study were the small sample size and the lack of equipment to confirm that the subjects inhaled full vital capacities of 35% CO2 and air during the experiment.

The positive correlation between the respiratory ratio and the PD symptoms elicited by the CO2 inhalation indicate that the intensity of respiratory symptoms may be commensurable with the sensitivity to carbon dioxide. The respiratory ratio may be a useful tool in the research of PD as a bridge connecting the psychopathology to the underlying neurobiology. 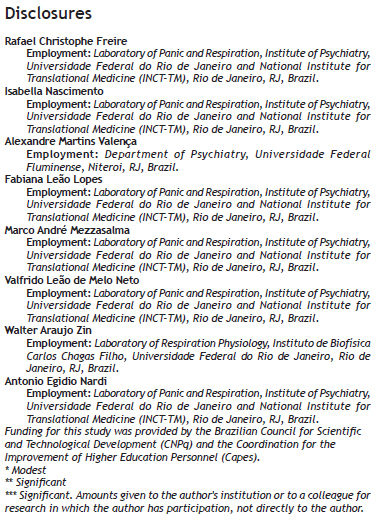