OBJECTIVE: To adapt the trait version of the Self Statements during Public Speaking (SSPS) scale to a state version (SSPS-S) and to assess its discriminative validity for use in the Simulated Public Speaking Test (SPST).
METHOD: Subjects with and without social anxiety disorder (n = 45) were assessed while performing the SPST, a clinical-experimental model of anxiety with seven different phases.
RESULTS: Alterations in negative self-assessment occurred with significant changes throughout the different phases of the procedure (p = .05). Non-cases presented significantly higher mean values of the SSPS-S in all phases of the procedure than cases (p < .01).
CONCLUSION: Cases assessed themselves in a less positive and more negative manner during the SPST than did non-cases. SSPS-S is adequate for this assessment, especially its negative subscale, and shows good psychometric qualities.

The need for systematic studies of the association between anxiety and public speaking has led to the proposal of experimental procedures that almost always use a simulation of a real-life situation as a focus of observation. One important example of these procedures is described in the study by McNair et al.,1 who developed a clinicalexperimental model of anxiety by proposing the Simulated Public Speaking Test (SPST). Studies that used the SPST with adapted protocols have also included subjective measures to assess the performance of the task and the cognitive aspects related to anxiety. According to a review by Osório et al.,2 however, these instruments are not standardized and are usually designed for a specific study, thereby lacking psychometric evaluations to attest to their adequacy.

The cognitive aspects involved in anxiety, especially in performance-related anxiety regarding tasks involving exposure,3 should be assessed in experimental models to confirm the fundamental role of beliefs and cognitions in Social Anxiety Disorder (SAD). Such an evaluation can serve as a procedure for the analysis of interventions based on cognitive restructuring and live exposure.

Given the adequacy of the trait version of the Self Statements during Public Speaking (SSPS) scale,4 this study aimed to adapt this instrument to a state version and assess its discriminative validity for use in the SPST, involving a sample of SAD cases and non-cases. We hypothesized that negative self-assessment, especially in SAD cases, would increase, with the opposite happening regarding positive self-assessment induced by the procedure.

Subjects included university students of both genders, aged 18 to 35 years. The following inclusion criteria were adopted for the present study: a) SAD Group: a score of six or more in the Mini-SPIN (MS), a positive diagnosis of SAD according to the SCID-IV and the absence of axis I psychiatric co-morbidities; and b) SAD Non-Case Group: a score of zero or one on the MS, a negative SAD diagnosis and the absence of axis I psychiatric disorders. After the inclusion criteria were applied, a convenience sample of 45 subjects was selected, 24 of them belonging to the SAD Case group and 21 belonging to the SAD Non-Case group.

d. Self Statements during Public Speaking (SSPS) scale, - trait and state version. The trait version of this instrument was developed by Hofmann & DiBartolo4 and adapted and validated into Brazilian Portuguese by Osório et al.8 The state version of the SSPS (SSPS-S: Self-Statements During Public Speaking Scale - State version) was modified as part of the present study to assess the state of anxiety experienced at the time of public speaking. The SSPS and the SSPS-S, self-applied instruments consisting of ten items scored on a 6-point Likert scale, are divided into two subscales: positive and negative self-assessment.

The translated and adapted Portuguese version of the SSPS8 had its instructions modified so it could be used to assess anxiety at different times of the public speaking test. The instructions were modified to the following: Imagine the things you are thinking now about yourself in this situation of talking in front of the camera. Keeping in mind this situation, to what extent do you agree with the statements given below? Please assign a score of 0 (if you fully disagree) to 5 (if you fully agree with the statement).

The experimental session was performed in a room with sound attenuation and temperature control. Soon after the subject's arrival, his/her basal (B) anxiety was measured, followed by a period of 30 minutes without stimulation, after which pre-stress (P) anxiety was gauged. After the application of the scales, the researcher played a videotape with the task instructions. The subject was told that he/she would have two minutes to prepare a speech about his city's public transportation system, which was selected as an emotionally neutral topic of common knowledge, and that the speech would be interrupted in the middle for the application of scales. The participant was also told that the speech would be recorded on videotape and later analyzed by a psychologist. After the two-minute preparation period, anticipatory (A) anxiety was assessed before the subject started speaking in front of the camera, while viewing his/her own image on the TV screen. The speech was interrupted in the middle, when stress (S) anxiety measures were assessed. The speech was recorded for another two minutes. Final measures were taken immediately after the speech (post-stress anxiety - F0), as well as 15 (F1) and 35 minutes (F2) after the end of the speech.

The demographic and clinical data of the study sample were analyzed using Mann-Whitney tests, and chi-square tests were used to compare the sociodemographic characteristics of the groups.9 A repeated measures ANOVA was used to compare the self-assessments of anxiety between a given phase of the study and the preceding one. The Repeated Contrasts Formation Test was applied to determine differences between phases.10

Sociodemographic characterization of the sample

The sample consisted mainly of male individuals (67%), and the mean age was 20.4 years. Most of the students were enrolled in life sciences (49%) and exact sciences (47%) courses. The analysis of the sample as a function of the presence or absence of SAD revealed no difference regarding the sociodemographic variables studied (p > .01), showing that the two groups were matched in respect to these characteristics.

To evaluate the discriminative validity of the SSPS-S during the SPST in the presence and absence of SAD, we initially calculated the mean score for subjects identified as SAD cases and non-cases in the subscales as a function of the different phases of the procedure. We observed that noncases presented significantly higher mean values in all phases of the procedure compared to SAD cases (p < .01). A higher mean assessment value in the positive subscale represented a greater positive self-assessment. Conversely, a lower mean score in the negative subscale, in which the scores are inverted, indicated a higher negative self-assessment. Thus, it was observed that cases assessed themselves in a less positive and more negative manner during the SPST than did non-cases.

We also analyzed the capacity of the SSPS-S to discriminate among the different levels of anxiety elicited in the diverse phases of the SPST. The results are presented in Figure 1. 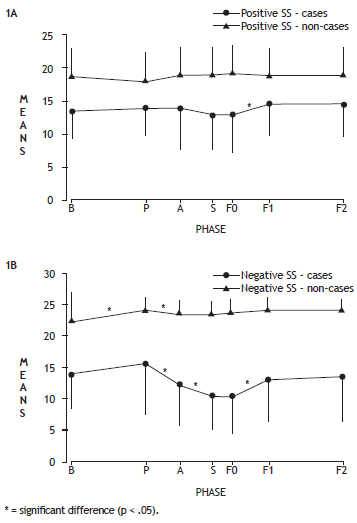 Figure 1 Distribution of mean scores in the positive (1A) and negative (1B) subscales (SS) of the Self-Statements during Public Speaking Scale - State version during the different phases of the Simulated Public Speaking Test (n = 45).

The SSPS-S was quite sensitive in discriminating SAD cases from non-cases in all phases of the procedure, which demonstrated that cases perform a less positive and a more negative assessment of themselves and their performances during public speaking compared to non-cases, as was theoretically expected. The same occurred with the SSPS-trait version,4,11-13 which shows the discriminative potential of the instrument in its two versions. The SSPS-S was also sensitive in discriminating the different patterns of anxiety elicited during the SPST, especially in subjects classified as SAD cases, whereas its sensitivity decreased for non-cases. The negative subscale was more sensitive, while the positive subscale demonstrated practically no alterations along the procedure. This result can be explained by the low discriminative capacity of the positive subscale, which has also been the case in other comparisons, such as those of the original study by Hofmann & DiBartolo.4 The SAD, from the point of view of cognitive theories, is characterized by an increased negative perception itself and negative selfevaluation, which favors a higher sensitivity for negative subscale compared to the positive.

These data demonstrate that the SSPS-S is sensitive for the assessment of the cognitive mechanisms associated with public speaking and consequently with SAD, considering that the findings were more expressive in the case sample. This result shows that the self-assessment of performance varied as a function of the different states of anxiety elicited by the experimental model, supporting the hypothesis that cognitive mechanisms, and especially negative cognitions, are associated with the etiology of both the fear of public speaking and SAD.3,14

We should also emphasize the relevance of the assessment of the cognitive aspects involved in the fear of public speaking in view of the prevalence of this fear in the general population and in SAD. This contributes to the assessment of beliefs and cognitions associated with social anxiety and highlights the conceptual aspects related to theories about social anxiety and to methodological aspects related to the potential of the experimental procedure of SPST.

Some limitations of the study, such as the small sample used and its peculiarities (college students) and that we analyzed only the test's discriminative validity, must be considered. Further studies involving larger samples and further analyses of other psychometric parameters are necessary. 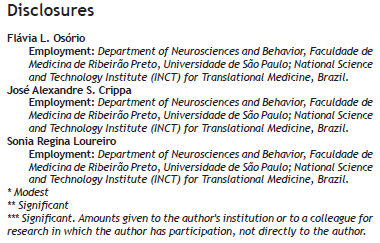