INTRODUCTION: Bipolar disorder (BD) is a prevalent, chronic and progressive illness. There is a growing body of evidence indicating that brain-derived neurotrophic factor (BDNF) plays an important role in the pathophysiology of BD.
OBJECTIVE: The aim of this study was to evaluate BDNF plasma levels in BD patients with long term illness in comparison with controls.
METHODS: 87 BD type I patients and 58 controls matched by age, gender and education level were enrolled in this study. All subjects were assessed by the Mini-International Neuropsychiatric Interview and the patients by the Young Mania Rating Scale and the Hamilton Depression Rating Scale. The plasma levels of BDNF were measured by ELISA.
RESULTS: On average, patients had suffered from BD for 23.4 years. In comparison with controls, BD patients with mania presented a 1.90-fold increase in BDNF plasma levels (p = .001), while BD patients in remission presented a 1.64-fold increase in BDNF plasma levels (p = .03). BDNF plasma levels were not influenced by age, length of illness or current medications.
CONCLUSIONS: The present study suggests that long-term BD patients exhibit increased circulating levels of BDNF.

Bipolar disorder (BD) is a prevalent, severe and chronic disorder that affects mood and cognitive functions. In contrast to the old Kraepelin concept that BD has a cyclic and permanent course,1 recent evidence has shown an accelerated and progressive course.2 The physiopathology of BD is unknown, but a body of evidence suggests a complex interaction among susceptibility genes, environmental stressors and biochemical mechanisms.3 The modulation of brain-derived neurotrophic factor (BDNF) levels has been suggested to be one of the major mechanisms involved in BD physiopathology. However, there is scarce information regarding the circulating levels of BDNF in long-term BD patients. Accordingly, the main aim of the present study was to evaluate plasma levels of BDNF in a sample of long-term BD patients in comparison with matched healthy subjects. Secondary analyses were performed to identify clinical and demographic factors associated with the variation in BDNF levels.

This was a cross-sectional study that evaluated 87 BD type I patients and 58 healthy controls matched by age and gender. Patients were consecutively recruited from outpatient and inpatient psychiatric settings at the Instituto de Previdência dos Servidores do Estado de Minas Gerais (IPSEMG), Belo Horizonte, Brazil during a one-year-period. This clinic provides long term assistance for patients with chronic mental illnesses. All patients were medicated. The local institutional review board approved the study, which is in accordance with the Helsinki Declaration of 1975. All participants were more than 18 years old. All volunteers provided their written consent after a complete explanation of the procedures involved in the research protocol was provided.

Patients and healthy controls were assessed with the Mini-International Neuropsychiatric Interview (M.I.N.I.-Plus) to confirm BD and other comorbid psychiatric disorders (in patients), or to exclude a history of psychiatric disorders (in controls).4 Patients with BD were also examined with the 17-item version of the Hamilton Depression Rating Scale, (HDRS)5 and the Young Mania Rating Scale (YMRS)6 to characterize the severity of depressive and manic symptoms, respectively. Remission was defined as HDRS and YMRS scores lower than seven points for at least eight consecutive weeks. Clinical assessment of patients included the collection of the following demographic and clinical variables: gender, age, years of education, length of disease, current medications and medical comorbidities. Length of illness was calculated by subtracting age at first major depressive or manic mood episode, as recorded in the clinical record or reported by the subject or family members, from the subject's current age in years. The healthy control group was recruited from the local population and did not have any personal psychiatric disorder (evaluated through M.I.N.I.-Plus) or family history of psychiatry disorder, suicide attempts or completed suicide. Subjects with dementia, infectious or autoimmune diseases, or who had used steroids, anti-inflammatory drugs or antibiotics four weeks before venipuncture were excluded from the study.

Ten milliliters of blood were drawn between 8 and 10 a.m. from each subject by venipuncture into a sodium heparin tube, on the same day of the clinical assessment. The blood was immediately centrifuged at 3,000 g for 10 min at 4ºC, twice. The plasma was collected and stored at 70ºC until assayed.

Plasma levels of BDNF were measured by enzyme-linked immunosorbent assay (ELISA) according to the procedures supplied by the manufacturer (DuoSet, R&D Systems, Minneapolis, MN, USA). All samples were assayed in duplicate. Lower detection limits were reported by the manufacturer to be 5 pg/mL for BDNF. Concentrations are expressed as pg/mL.

Statistical analyses were performed using SPSS software version 17.0 (SPSS Inc., Chicago, IL, USA). Associations between dichotomous variables were assessed with a chi-square test. All variables were tested for normality of distribution by the Shapiro-Wilk test, which did not lead to rejection of normality for any data. Two groups (patients vs. controls or mania vs. remission) were compared by a Student t-test. Difference among groups was evaluated using analysis of variance (ANOVA) followed by the Dunn post-hoc test. Pearson's correlation analyses were performed to examine the relationship between plasma levels of BDNF and age, length of illness, and severity of manic and depressive symptoms. All statistical tests were two-tailed and were performed using a significance level of α = .05.

In BD patients, plasma levels of BDNF did not correlate with the presence of psychiatric and clinical co-morbidities, substance dependence, or the use of any mood stabilizing drug, i.e., atypical antipsychotics (p = .87), lithium (p = .13) or anticonvulsants (p = .82).

Since circulating levels of BDNF may reflect its cerebral concentration,8 it is possible that higher BDNF concentrations over the long course of BD may represent a reaction to cerebral damage that occurred in the early stage of the disease, when neurodegenerative or neuroprogressive mechanisms seem to be more intense and BDNF levels are decreased.9 This assumption is in line with evidence from other neuropsychiatric disorders, such as long-term schizophrenia,10,11 and an experimental model of Alzheimer's disease.12 A second hypothesis relates the effect of mood stabilizing drugs to BDNF levels. For instance, lithium therapy seems to increase the levels of BDNF in BD patients in mania.13

This study has strengths and limitations that must be considered for the interpretation of the results. The diagnostic interviews of both patients and controls were performed using the same protocol, overcoming a limitation of previous similar studies. In addition, the large sample size and the exclusion of patients with other medical conditions, such as inflammatory diseases, can be considered strengths of the study. The use of medications by all BD patients is a limitation.

In conclusion, our data reinforce the view that there is BDNF imbalance in long-term BD.

This work was funded by the Brazilian funding agencies Fapemig and CNPq. Dr. Barbosa was the recipient of a CAPES scholarship during her sandwich doctorate in the Institute of Psychiatry, London. 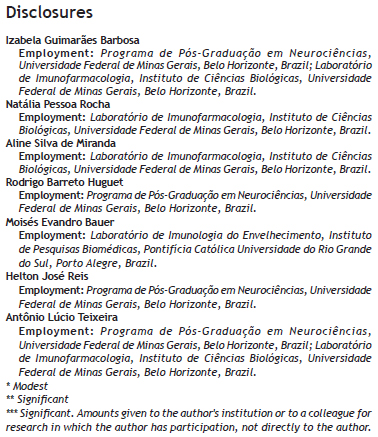