Staging and neuroprogression in bipolar disorder: a systematic review of the literature

Staging and neuroprogression in bipolar disorder: a systematic review of the literature

INTRODUCTION: The use of clinical staging models is emerging as a novel and useful paradigm for diagnosing severe mental disorders. The term "neuroprogression" has been used to define the pathological reorganization of the central nervous system along the course of severe mental disorders. In bipolar disorder (BD), neural substrate reactivity is changed by repeated mood episodes, promoting a brain rewiring that leads to an increased vulnerability to life stress.
METHOD: A search in the PubMed database was performed with the following terms: "staging", "neuroprogression", "serum", "plasma", "blood", "neuroimaging", "PET scan", "fMRI", "neurotrophins", "inflammatory markers" and "oxidative stress markers", which were individually crossed with "cognition", "functionality", "response to treatments" and "bipolar disorder". The inclusion criteria comprised original papers in the English language. Abstracts from scientific meetings were not included.
RESULTS: We divided the results according to the available evidence of serum biomarkers as potential mediators of neuroprogression, with brain imaging, cognition, functioning and response to treatments considered as consequences.
CONCLUSION: The challenge in BD treatment is translating the knowledge of neuronal plasticity and neurobiology into clinical practice. Neuroprogression and staging can have important clinical implications, given that early and late stages of the disorder appear to present different biological features and therefore may require different treatment strategies.

The use of clinical staging models is emerging as a novel and useful paradigm for diagnosing severe mental disorders.1 The staging concept is particularly practical, as it can differentiate early, milder clinical phenomena from those that accompany illness progression and chronicity.2 The logic of staging is based on accessing the clinical features of a patient within a longitudinal perspective of illness development to provide different treatment approaches according to their specific pathophysiological, symptomatic and structural changes at each stage of illness.3

The term "neuroprogression" has been increasingly used to define the pathological reorganization of the central nervous system (CNS) along the course of severe mental disorders.4 This reorganization could arise as the result of several insults, such as inflammation and oxidative stress.5 In bipolar disorder (BD), neural substrate reactivity is changed by repeated mood episodes, ultimately promoting a brain rewiring that leads to an increased vulnerability to life stress.6-8

Recurrent episodes influence the outcome of BD by increasing a patient's vulnerability to subsequent episodes and reducing the treatment response.9 An episode-dependent deterioration pattern has been widely described in serum biomarkers,4,10 brain imaging11,12 and functioning.13-16 Therefore, staging models emphasizing the assessment of patients in the interepisodic period17-20 have been proposed to personalize and optimize treatments for BD. 21

The neurobiological mechanisms of more pronounced neuroanatomical brain changes in patients with multiple mood episodes of BD appear to include increased oxidative stress, increased pro-inflammatory markers and a deficit in neuroprotection.4 Although definitive empirical evidence is lacking, staging and neuroprogression can be conceived of as two facets of the same phenomenon (Figure 1).22 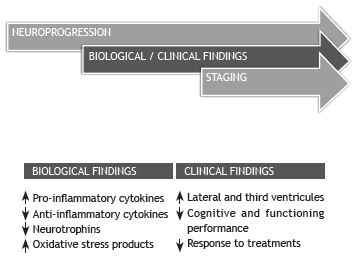 Figure 1. Linking neurobiological and clinical findings to neuroprogression and staging.

The inclusion criteria comprised original papers in the English language. Abstracts from scientific meetings were not included. There was no limit for the year of publication, and the search included papers until July 2012.

The search retrieved 70 articles, from which 65 were included. The remaining 5 articles were excluded for the following reasons: case report (n = 2), comment on an original paper (n = 1) and studies focusing on other disorders and conditions (n = 2).

We divided the results according to available evidence of serum biomarkers as potential mediators of neuroprogression, with brain imaging, cognition, functioning and response to treatments considered as consequences.

Data from different lines of research converged to the brain-derived neurotrophic factor (BDNF) as an important contributor to neuroplastic changes in BD. Serum BDNF levels have been shown to be decreased during depressive and manic episodes and to return to normal levels in euthymia.23-26 In this line, a decrease in BDNF levels acts as a state-dependent biomarker for mood episodes in BD.27,28 It has also been shown that decreased BDNF levels are found in chronic or late-stage individuals with BD, in comparison to patients in early stages of the illness,29 and an overall accelerated age-related decrease of BDNF was discovered in patients with BD.30 In young adults with bipolar disorder recruited from the general population, BDNF levels tend to be similar to those of healthy controls.22

Factors that negatively influence the course of BD, such as life stress and trauma, have been shown to be associated with a decrease in serum BDNF levels among people with bipolar disorder.31 However, effective treatments, such as lithium and divalproex, have proven to prevent cellular atrophy, to have anti-apoptotic properties and to increase BDNF levels.32

Available evidence indicates that BD and inflammation are linked through shared genetic polymorphisms and gene expression, as well as altered cytokine levels33 during acute episodes34,35 and euthymia.36,37 It has been suggested that inflammatory cytokines, particularly TNF-α, may play a critical role in the process of changes in neuroplasticity, cell resilience and neuronal survival.38,39 Additionally, BDNF and TNF-α serum levels combined have been proposed as staging biomarkers for BD.17 When early- and late-stage patients with BD were compared, IL-6 and TNF-α were elevated in both groups, while IL-10 levels were higher in the early stages. However, TNF-α was higher in late stages than in early.

BD is associated with an imbalance in oxidative biology and often involves an increase in lipid damage that is measured by thiobarbituric reactive substances (TBARS) and nitric oxide (NO) and a decrease in antioxidant enzymes, such as superoxide dismutase (SOD).40 TBARS serum levels are increased, regardless of mood state,41 and are more pronounced in mania. Inversely, protein damage was higher in depression than in mania in one study.42 An increase in protein damage was also found in young people with earlystage bipolar disorder and may be an early indication of systemic toxicity.43 Apart from protein carbonylation, there is an increased frequency of DNA damage in patients with BD when compared to controls; this damage is correlated to severity of depression and manic symptoms.44 Furthermore, both depressed and euthymic bipolar patients present endothelial function impairment due to oxidative stress that may contribute to increase their risk for cardiovascular conditions.45 A negative correlation between BDNF and TBARS was found in a BD cohort during manic episodes.46 Hence, oxidative stress may also help to link the accelerated aging, cognitive and functional impairment and premature mortality observed in BD.47

Due to the important role of neurotrophins, oxidative stress markers and inflammatory markers in BD, a systemic toxicity index was proposed to assess peripheral changes in mood episodes. These systemic markers were shown to differentiate between acute mood states and two control conditions, healthy adults and people with sepsis, with the acute mood states positioned as intermediaries between the two controls.42,48 As an aggregate, these biological markers were subtly elevated in people from the general population in early stages.49 Further study is needed to demonstrate how this systemic toxicity differs in early- and late-stage bipolar disorder.

Alterations in brain structures have been widely reported in BD patients. Morphometric studies have demonstrated that patients with BD show an enlargement of the third and lateral ventricles; a reduction in the gray matter volumes of the orbital and medial prefrontal cortex, ventral striatum and mesotemporal cortex; and an increase in the size of the amygdala.12,50-52 Such neuroanatomical changes tend to be more pronounced in patients with repeated episodes.11,12 In terms of neuropathological findings, recent data suggest that changes in neuroplasticity, particularly in cell resilience and connectivity, are the main findings in BD.52

Patients with bipolar disorder present cognitive impairment during both the acute phase of illness and remission, which seems to worsen with cumulative episodes.53-56 The main cognitive impairment has been demonstrated to affect executive functions, while moderate cognitive deficits was observed in other cognitive tests, such as verbal memory, response inhibition, sustained attention, psychomotor speed, abstraction and set-shifting.57 Deficits in executive function and verbal memory suggest the impairment of the prefrontal and medial temporal cortices, respectively. Some measures of frontal executive function (Stroop Color Test and Word Test, the Wisconsin Card Sorting Test, the FAS subtest, and the digit subtest backward) and of learning and memory tasks (Wechsler Memory Scale - Revised and the California Verbal Learning Test) have been found to be associated with poorer functional outcomes. Difficulties in remembering long-term information are associated with lower occupational functioning in BD,58,59 and poor cognitive functioning is one of the main factors that explains the high rates of disability and burden associated with BD.60 In addition to these, psychosocial functioning impairment presents a progression13,14 and is present during euthymia.61

Illness progression is also associated with changes in treatment response. The response to lithium is inversely correlated to the number of episodes62 and duration of illness prior to starting treatment.63 Consistently, olanzapine was found to be more effective early in the course of BD.9 The same findings were replicated in the field of psychosocial treatments where patients with multiple recurrences do not seem to respond to adjunctive cognitive behavioral therapy16 or to family psychoeducation.15 Recently, an analysis of the STEP-BD dataset replicated a meta-analysis that revealed that people with more than 10 previous episodes have an overall worse treatment response, which was stable during follow-up.64

Acute mood episodes have been associated with significant systemic toxicity, cognitive and functional impairment and biological changes.42,49 These effects are cumulative and are much more prominent after multiple episodes.29,50,66,67 It is plausible that mood episodes function as allostatic states, generating a load that accumulates to compromise regulatory systems and ultimately bearing responsibility for the progression of the illness.6,7

The challenge in BD treatment is translating the knowledge of the neuronal plasticity and neurobiology of the illness into clinical practice. Neuroprogression and staging can have important clinical implications, given that the early and late stages of the disorder appear to present different biological features and therefore may require different treatment strategies.

3. Francey SM, Nelson B, Thompson A, Parker AG, Kerr M, Macneil C, et al. Who needs antipsychotic medication in the earliest stages of psychosis? A reconsideration of benefits, risks, neurobiology and ethics in the era of early intervention. Schizophr Res. 2010;119(1-3):1-10.

62. Maj M. The impact of lithium prophylaxis on the course of bipolar disorder: a review of the research evidence. Bipolar Disord. 2000;2:93-101. 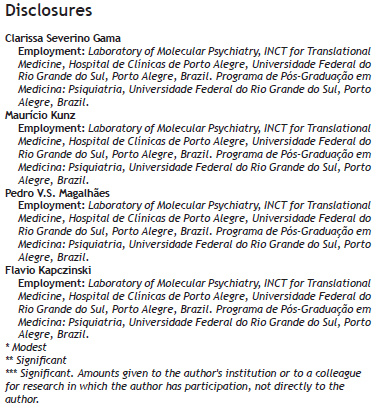