OBJECTIVE: Summarize data on metabolic syndrome (MS) in bipolar disorder (BD). Methods: A systematic review of the literature was conducted using the Medline, Embase and PsycInfo databases, using the keywords "metabolic syndrome", "insulin resistance" and "metabolic X syndrome" and cross-referencing them with "bipolar disorder" or "mania". The following types of publications were candidates for review: (i) clinical trials, (ii) studies involving patients diagnosed with bipolar disorder or (iii) data about metabolic syndrome. A 5-point quality scale was used to assess the methodological weight of the studies.
RESULTS: Thirty-nine articles were selected. None of studies reached the maximum quality score of 5 points. The prevalence of MS was significantly higher in BD individuals when compared to a control group. The analysis of MS subcomponents showed that abdominal obesity was heterogeneous. Individuals with BD had significantly higher rates of hypertriglyceridemia than healthy controls. When compared to the general population, there were no significant differences in the prevalence of low HDL-c in individuals with BD. Data on hypertension were also inconclusive. Rates of hyperglycemia were significantly greater in patients with BD compared to the general population.
CONCLUSIONS: The overall results point to the presence of an association between BD and MS, as well as between their subcomponents.

Bipolar disorder and metabolic syndrome 89 Introduction Bipolar disorder (BD) is a chronic disease characterized by extreme changes in mood polarity. Onset typically occurs between adolescence and early adulthood. BD is associated with impairments in social and neuropsychological development, resulting in a high level of overall impairment. BD is the sixth leading cause of disability in the world and has a global prevalence estimated at .8%.1

In addition to the psychiatric symptoms associated with BD, there is also evidence suggesting that BD patients are at increased risk for clinical diseases in comparison to healthy controls. A sedentary lifestyle, smoking, and an unhealthy diet are prejudicial factors, as are metabolic disorders and neurological/cardiovascular diseases.2 As a result, patients with BD have a life expectancy that is reduced by 25 to 30 years.3

Among the clinical diseases that are comorbid with BD, there is evidence of a high rate of metabolic syndrome (MS) in bipolar patients. MS is collection of metabolic risk factors with an unknown etiologic basis and pathophysiological mechanisms that increases the chances of developing cardiovascular disease and type 2 diabetes.3 The prevalence of MS in the world population ranges from 6.0% to 70.3%, depending on variables such as diagnosis criteria, comorbidities, ethnic group and sex.4

In bipolar patients, MS comorbidity is associated with a more complex disease, a less favorable response to treatment, and adverse courses and outcomes, such as an increased risk for depressive symptoms and episodes, including the risk of suicide.5,6

Thus, the aim of this study is to summarize data on metabolic syndrome in patients with BD.

To identify studies that are relevant to the current study, a systematic review was conducted with the Medline, Embase and PsycInfo databases, using the keywords "metabolic syndrome", "insulin resistance" and "metabolic X syndrome", and cross-referencing them with "bipolar disorder" or "mania". The search was conducted during May of 2012 and was limited to human studies published in English. Duplicated articles were excluded. The remaining paper titles and abstracts were used to determine whether the reference might be pertinent to the review. The following types of publications were candidates for review: (i) clinical trials, (ii) studies involving patients diagnosed with bipolar disorder, or (iii) data about metabolic syndrome.

To assess the methodological weight of the studies, a 5-point quality scale was used that included the following items: a sample with at least 100 BD patients, a standardized BD diagnostic measure, use of the NCEP National Cholesterol Education Program (NCEP) or the International Diabetes Federation (IDF) criteria for MS, and a central aim of evaluating MS in BD patients or of comparing BD patients to controls or data from the general population. This quality score was based on a similar scoring method that used for two other published review articles relevant to the current study.7,8

The literature search conducted using Medline, Embase and PsycInfo resulted in 457 articles. After the duplicate articles were excluded, 70 titles and abstracts were evaluated for pertinence. This process resulted in 39 references that were relevant to the present literature review. The search chart is shown in Figure 1, and the data extracted from these studies is available online as Supplementary Information. 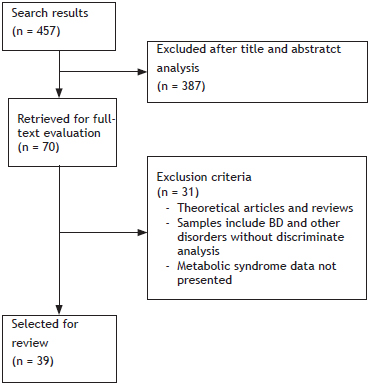 None of the studies reached the maximum quality rating of 5 points, mainly due to the lack of a structured BD diagnostic measure, the lack of a control group or general population comparison, or a sample size of less than 100 BD subjects.

The prevalence of MS in BD patients was distributed according to different criteria, as presented in Table 1. 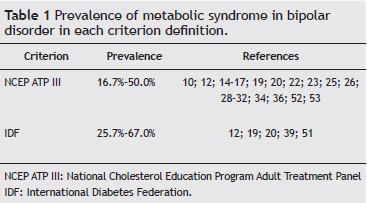 Patients with BD had a slightly higher rate of MS compared to the general population, but this difference failed to reach significance.9-12 However, when compared to a control group, the prevalence of MS was significantly higher in BD patients.12-16

BD patients with MS were significantly older than BD patients without MS.14,17-21 The risk of MS increased more than 3 times in BD subjects over 30 years old12,19 when compared to a control group.15,16 However, one study showed no association of MS with age.9 There were no significant differences in MS rates according to gender.6,9,10,14-17,20-31

Course of disorder and clinical outcomes

Several studies found no association between psychotropic drug use or treatment strategy and elevated rates of MS.10,12,14,22,32-34 However, more of the subjects taking olanzapine, clozapine, or lithium met criteria for MS than those who did not take these drugs.17,35 Patients taking only antipsychotics had higher MS rates than patients taking only mood stabilizers.24

In the analysis of MS subcomponents, the findings on abdominal obesity were inconclusive.

Although some previous studies have found significantly higher obesity rates in BD patients compared to the general population11 or healthy controls,12 others have found a significant difference only in women10 or no difference at all.33 Data on the differences in gender prevalence are similarly conflicting; in two studies, female patients had significantly higher prevalence rates of abdominal obesity when compared to men,21,22 whereas another study showed no such difference.6

Despite finding some contradictory results, we report on a body of evidence that shows a higher prevalence of MS and its subcomponents in bipolar patients. MS was associated with a poor course of illness and prognosis in bipolar individuals, suggesting that this is still an important issue in clinical and psychiatric practice.

The variance in results could be explained by differences in the sample or could reflect differences in the prevalence of MS in the general population due to cultural differences in dietary habits, levels of physical activity and genetic backgrounds. These factors may have influenced the analysis of the subcomponents as well. Indeed, the heterogeneity of the criteria is a significant concern regarding MS diagnosis41 and could have affected the prevalence rates in the reviewed studies. The criteria by the NCEP ATP III and the IDF are the most widely used to diagnose MS, but there are some differences between them (Table 2). Moreover, there is a large cluster of criteria modifications that makes clinical diagnosis and research analysis challenging.

Although the use of psychotropic drugs provides a common-sense explanation of some of the components of MS, studies that do not find this association show that medications are not a simple explanation. Most BD patients reported polypharmaceutical drug use or had used different types of medication during the course of their disease. Because antipsychotic polytherapy increases the prevalence of MS compared to monotherapy,42 the use of multiple medications could aggravate the course of MS, resulting in a worse outcome.35 However, the co-occurrence of BD with obesity and changes in glucose metabolism are observed even before the existence of these medications.11 A study with first-episode psychotic patients showed increasing rates of obesity, hyperglycemia and dyslipidemia after using atypical antipsychotics.43 Studies with first-episode or drug-free BD patients are required to clarify the role of medication in this association.

Mechanisms linking MS and bipolar disorder have been largely unidentified. Hypotheses have emerged positing that both negative health behaviors, such as smoking, poor diet, overeating, and a sedentary lifestyle,44 and biological factors of MS, such as hypothalamic-pituitary-adrenocortical (HPA) axis and sympathoadrenal hyperactivity, and abnormalities of the immunologic system,45 such as increased proinflammatory cytokines,46 are correlated with BD.

Negative outcomes such as psychiatric and physical comorbidities could also be explained by the concept of allostatic load (AL). AL results from an overload in the allostatic processes due to the chronic overactivity or inactivity of the physiological systems (such as the hypothalamic-pituitary-adrenal axis) that are involved in the capacity to achieve stability through adaptation to internal and external demands (i.e., allostasis). Patients with a higher AL were found to have an increased risk of incidental cardiovascular disease and all-cause mortality, which is in accordance with the increased prevalence in found in BD patients of medical conditions such as diabetes, hypertension, ischemic heart disease and stroke.47 All of those correlated factors, such as neuroendocrinal and inflammatory abnormalities, the use of psychotropic drugs and negative health behaviors, act like allostatic components that reinforce the role of AL in BD-MS association.

Several limitations were noted during the review of the cited articles in the current study. First, differing experimental designs and sampling methodologies make formal comparison between studies difficult. Different criteria used to diagnose MS and the lack of a structured diagnostic interview to confirm a bipolar diagnosis did not allow for standardization of the results. Additionally, most of the studies were cross-sectional. Because of this limitation, a causal relationship between bipolar disorder and metabolic syndrome could not be established. The medication treatment regimen may also be a liability, evoking the need for longitudinal studies.

In conclusion, the association between MS and BD, although not clear, is important to consider, as BD patients have other risks factors for MS, such as increased rates of cardiovascular disease and diabetes. Because cardiovascular risk is increased in bipolar patients, and because of the negative impact of MS on general physical and psychological well-being and functioning, MS could contribute to a worse prognosis for BD and vice-versa. Therefore, psychiatrists should be aware of the risk factors involved in MS and should intervene as soon as possible to prevent metabolic abnormalities that could influence the prognosis of bipolar disorder. Such strategies include monitoring the patient's lifestyle, eating habits and exercise routine. 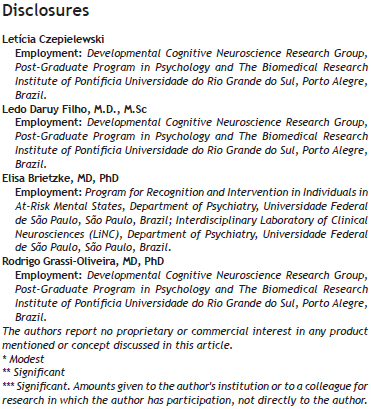