Successful re-exposure to clozapine after eosinophilia and clinically suspected myocarditis

Successful re-exposure to clozapine after eosinophilia and clinically suspected myocarditis

Clozapine is a highly effective antipsychotic drug, but it is associated with significant adverse reactions. We are reporting a case of successful re-challenge with clozapine after eosinophilia and clinically suspected myocarditis.

The patient is a 22-year-old gentleman with a 3-year history of paranoid schizophrenia and poor response to treatment. With a normal white blood cell count, absolute neutrophil count (ANC) and absolute eosinophil count (AEC), we initiated clozapine treatment at 25 mg twice per day. After 14 days of increasing treatment, the eosinophil count was elevated at 820/µL, and the patient reported shortness of breath and tachycardia. On day 21, the sedimentation rate (SR) and C-Reactive Protein (CRP) were increased (20 mm/h and 27 mg/L). The chest x-ray was normal; the electrocardiogram (ECG) showed sinus tachycardia and unspecific T-wave abnormalities; the creatine-kinase (CK) was 823 (U/l); and the troponins were normal. AEC peaked at 2.870/µL on day 28 (clozapine dose: 400 mg). On day 30, the patient reported chest pain and had elevated SR and CRP (peak at 43.4). The computed tomography angiography showed mild left lower lobe atelectasis and small pleural effusion but no ischemia, pericarditis or myocarditis. AEC stabilized at approximately 2.400 /µL. Eighteen days after discharge, the patient discontinued Clozapine, and AEC normalized. Clozapine was subsequently re-started (increased to 500 mg daily), and AEC remained normal.

This case highlights the need for a high index of suspicion for myocardial involvement in patients taking clozapine, especially in the presence of eosinophilia. Eosinophilia associated with clozapine has been reported in 1 to 62%1,2 of patients, who often remain asymptomatic. Initial symptoms of clozapine-induced myocarditis are unspecific or even absent.1 Eosinophilia was found in 65% of clozapine-induced myocarditis cases and 32% of patients without myocarditis. Some have reported tachycardia in up to 90% of myocarditis cases.4 Ronaldson et al. recommend the following guidelines for the early detection of myocarditis: baseline troponins, CRP, echocardiogram and monitoring for 4 weeks, continued treatment for mild myocarditis and defining thresholds for discontinuation.3 Eosinophilia was not included in the protocol. Other authors5 recommend an electrocardiogram, serum troponins or CK-MB (myocardial band) for patients who develop fever, cardiorespiratory and flu-like symptoms or eosinophilia while on clozapine. In the absence of a standardized protocol or an effective screening assay for clozapine-induced myocarditis, close monitoring is recommended, especially in the first weeks of treatment. 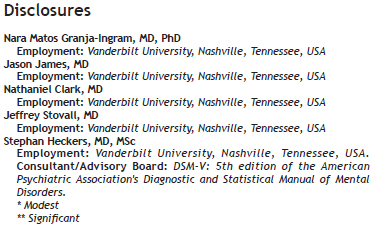