Could disulfiram be a new treatment for crack cocaine dependence? A pilot study

Could disulfiram be a new treatment for crack cocaine dependence? A pilot study

Crack cocaine use has increased in Brazil in recent years and is already considered an epidemic. It is a cheaper form of cocaine use but is much more damaging to the body. There are few treatments available for the public, particularly low-cost treatments. Some clinical trials have demonstrated success with the administration of disulfiram as an add-on therapy in patients with cocaine dependence.1-3 However, no study has evaluated the efficacy and safety of this medication in crack cocaine addiction.

This double-blind pilot study followed 30 patients with crack cocaine dependence who spontaneously sought out the Psychosocial Attention Center for Alcohol and Drugs of Palmas, Brazil. The study assessed the effectiveness and safety of disulfiram as an add-on therapy to motivational interviewing and group therapy in patients with crack cocaine dependence. The inclusion criteria were as follows: male; subjects with a diagnosis of crack cocaine dependence according to the 10th edition of the International Classification of Diseases (ICD-10); and age between 18 and 40 years. The exclusion criteria were as follows: negative history of crack cocaine dependence, physical illness or another psychiatric disorder; use of another drug; and unable or unwilling to consent. The presence of another psychiatric disorder was assessed by a psychiatrist that used the ICD-10 diagnostic criteria.Seventy-four subjects were assessed, and 30 patients had a diagnosis of dependence.

The subjects were randomly divided by permuted blocks into two groups; 15 subjects (28.6 ± 4.4 years of age) received 250 mg of disulfiram daily for 60 days, and 15 controls (matched by gender, age and diagnosis) received placebo. The subjects were compared regarding the following factors: (i) treatment adherence (number of subjects who received treatment for the full 60 days); (ii) frequency of drug use (mean of number of days per week that crack cocaine was used); (iii) drug dose (daily mean dose of crack cocaine used in grams); and (iv) drug-free rate (number of subjects that stopped crack cocaine use after 60 days, confirmed by urinalysis); (v) side-effects. All subjects were assessed weekly by a psychiatrist who also used motivational interviewing. The subjects participated in eight sessions of motivational interviewing and group therapy during the study. Patients who abandoned treatment continued the motivational interviewing and group psychotherapy with a psychiatrist.

These data corroborate previous studies that reported the efficacy and safety of disulfiram in subjects with a crack cocaine addiction.1,4 A recent meta-analysis5 evaluated the efficacy and acceptability of disulfiram as an add-on therapy for cocaine dependence. The authors concluded that there is scant evidence supporting the efficacy of disulfiram in the treatment of cocaine dependence.5 In addition, disulfiram is inexpensive. However, it has been shown to increase the plasma cocaine concentration by three to six fold and significantly increase cocaine-associated cardiovascular responses in previous studies of acute and chronic administration.6,7 Additionally, these studies demonstrated that it did not significantly alter the behavioral responses to cocaine.6,7 However, we did not observe these side effects in our sample.

This study was limited in some respects. The sample size was small, but the results were significant. Additionally, urine testing was performed only twice in the eight-week study period. Therefore, it was necessary to complement the evaluation with self-reporting.

We demonstrated that disulfiram reduced the drug use frequency and dose by more than 50% in 60 days and conclude that it may be effective and safe as an add-on therapy for crack cocaine addiction. However, additional long-term studies with larger sample sizes are necessary to confirm these findings. 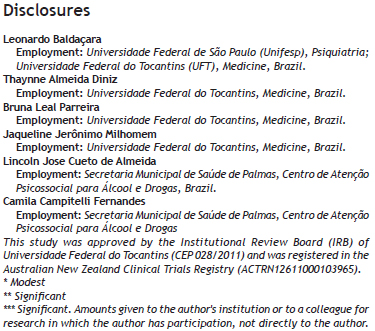