PSYCHIATRY AND THE ARTS 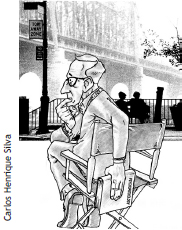 Born in New York, the moviemaker Woody Allen has directed or written scripts for 45 films, including his most recent, To Rome With Love, in 2012. Although he is in his seventies - he was born on December 1, 19351 - he is still extremely productive, producing at least one film per year since 1982;2 and he is not even thinking of retiring. He is always invited to new productions, including one in the city of Rio de Janeiro.

Woody is much more admired in Europe than in his own country, the United States.3 However, it would be unfair to say that he is disregarded by the Americans. With Midnight in Paris (2011), he topped the record of seven Oscar nominations for Best Director and Best Original Screenplay for the same movie, surpassing one of the best moviemakers of all time, Billy Wilder. The Oscar is not exactly a good parameter of artistic quality, as the great actress Fernanda Montenegro has lost the statue to Gwyneth Paltrow, a pretty actress, in the Best Actress category. Although Woody Allen has produced auteurist cinema with low budgets independent from Hollywood's great studios, and although he has always disregarded awards, including the Oscar,1 what calls attention to him is the recognition of his work by the Academy of Motion Picture Arts and Sciences. On the night when his film Annie Hall (1977) won four Academy Awards for Best Picture, Best Director, Best Original Screenplay and Best Actress in a Leading Role (he was also nominated for Best Actor) in Los Angeles, Woody was in Manhattan at Michael's Pub, playing clarinet with his New Orleans Jazz Band.1 He has only attended one Oscar ceremony, and that only to pay tribute to his beloved New York City the year after the September 11 terrorist attacks.

Woody has undergone psychoanalytic treatment for 36 years. Many characters in his films, especially those played by him, undergo some kind of psychotherapy2 and show some characteristics of mental disorders. For didactic purposes, or even for fun, we could try to find out which diagnostic categories some of these characters could fit into.4

In Annie Hall, for example, Alvy Singer (Woody Allen) has characteristics typical of dysthymia. Already in the film's opening monologue, he expresses his pessimistic view on life: "full of loneliness, misery, suffering and sorrow", which is "divided between the horrible and the miserable". The character has numerous books with the word "death" in the title. During the analysis that he has undergone for 15 years, he keeps on whining and moaning. He has very low self-esteem; therefore, paraphrasing Groucho Marx, he states that he will not belong to any club that will have him as a member. His girlfriend, Annie Hall (Diane Keaton), says he does not know how to enjoy life. It was not by chance that the film's temporary title was Anhedonia, which is defined as the inability to experience pleasure.4