Although obsessive-compulsive disorder (OCD) was classified as an anxiety disorder in the DSM-IV-TR,1 it has been changed to another category in the DSM-5, namely, that of obsessive-compulsive and related disorders. OCD, which has a worldwide lifetime prevalence of 2-3%, is characterized by intrusive unwanted thoughts, ideas, or images that are distressing and urge the sufferer to perform ritualistic behaviors or mental acts to reduce this distress.

OCD structural neuroimaging studies have reported changes in frontal region and basal ganglia, from increases to decreases to no difference.2-4 In these studies, some areas have been described as key brain regions, including the orbitofrontal cortex (OFC), thalamus, anterior cingulate cortex and caudate nucleus.2-4

Limited research has been carried out on the effects of pharmacological agents and psychotherapeutic interventions on the brain's neurochemistry and structure. Similarly, the effect of cognitive behavioral therapy (CBT) on psychiatric disorders has been inadequately evaluated.

Premkumar et al. aimed to determine whether CBT would affect pituitary volume in schizophrenia, reporting that CBT might reduce pituitary volume in schizophrenia by reducing distress from psychotic symptoms.5 The same conditions may be valid in OCD. A limited number of studies have examined the effects of selective serotonin reuptake inhibitors and other therapeutic approaches on brain volume and functionality in OCD patients.6-9 Other studies have reported that anti-obsessional drug treatment and CBT had an effect on key brain regions and the pituitary gland of OCD patients.10-12 In our previous study, while pituitary gland volumes were significantly smaller in OCD patients than healthy controls at baseline, we found that pituitary volumes significantly increased after 12 weeks of treatment.11 However, it is not well understood whether pharmacological and psychotherapeutic interventions affect the brain in different ways. For this reason, in the present study we planned to further investigate the effect of CBT on pituitary gland volume, which was found to be abnormal in OCD patients,11 and hypothesized that it would change after CBT as it does with psychopharma-cological treatment.

All OCD patients were informed about the study procedures at baseline. The CBT sessions were scheduled as sixteen weekly interviews. Short delays in attending therapy sessions were accepted, provided they were not longer than one week. Therapy sessions were performed individually. All sessions were performed by the first author (M.A.) at the Department of Psychiatry of the Firat University School of Medicine and by H.T. at the Department of Psychiatry of the Yildirim Bayezit Diskapi Training and Research Hospital. Both therapists are Academy of Cognitive Therapy-certified with several years' experience in cognitive and behavior therapy. As described in our previous studies on the OFC and thalamus11 and on hippocampus magnetic resonance spectroscopy,12 which involved the same patient group, the interview schedules were designed as follows: sessions 1-3 - psychoeducation on OCD; sessions 4-6 - arranging symptom hierarchies and preparing for exposure and response prevention; session 7-12 - studies on exposure and response prevention; sessions 12-16 - maintaining exposure and response prevention, talking about the recurrence of OCD symptoms. Patients who missed three sessions were considered to have dropped out. OCD severity was screened with the Yale-Brown Obsession Compulsion Scale (Y-BOCS) at baseline and end of the study period.15

All subjects were informed about the MRI procedure prior to the study to reduce anxiety, and an anti-anxiety drug was offered at the time of the procedure, although none accepted it. Scanning was performed with a 1.5 Tesla General Electric Signa Excite high-speed scanner (Milwaukee, USA). High-resolution imaging of the whole brain was performed with a sagittally acquired 3D spiral fast spin. The following parameters were used: repetition time (Tr) = 2,000 ms, flip angle = 20º, field of view (FOV) = 240 mm, echo time (TE) = 15.6 ms, bandwidth = 20.8, slice thickness = 2.4 mm, echo spacing = 15.6 ms, 8 echoes, resolution = 0.9375 x 0.9375 x 1.328 mm). The landmarks of the pituitary gland were determined with standard brain anatomy atlases16-18 and were adapted from Portas et al.19 and Riffkin et al.20 A manual tracing method was used that involved the landmarks from our previous studies.10,21-24 The upper boundaries of the pituitary gland were defined as the optic chiasm and infundibular recess of the third ventricle, while the sphenoid sinus was considered the lower boundary. The data were stored on optical discs and loaded onto a computer. The measurements were performed on an advanced computer workstation with the GE Volume Viewer (Voxtool 4.2) program. A sample scan of the pituitary gland is presented in Figure 1. Table 1 presents the pituitary gland volumes of OCD patients and healthy controls in cubic millimeters. All measurements were performed by a neuroradiologist experienced with the pituitary gland (HY) who was blinded to the subjects. The intraclass correlation coefficient value was 0.90 (r = 0.90). 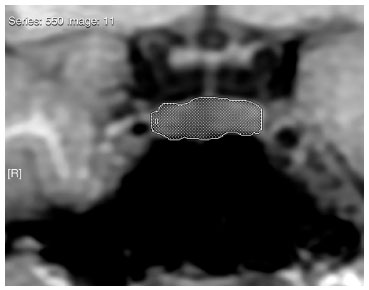 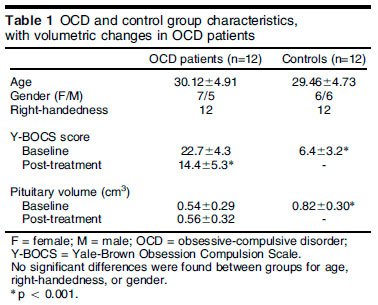 All statistical analyses for volumetric and clinical measures were performed using SPSS version 16.0. For group comparisons, continuous data were computed using independent samples t-tests, while categorical data were compared with the chi-square test. The General Linear Model in SPSS was used for volumetric comparisons. Age and total brain volume were used as covariates in the General Linear Model when comparing the baseline pituitary gland volumes of OCD patients with those of healthy controls. A paired t-test was also performed to compare the pituitary gland volumes of OCD patients before and after CBT. In addition, Spearman's correlation test was used to detect correlations between pituitary gland volumes and age and gender distribution, as well as Y-BOCS scores at baseline and the end of the study.

The sample's demographic and clinical variables are presented in Table 1.

As mentioned in our previous studies with identical sampling, OCD patients showed a significant decrease in obsession and compulsion severity scores on the Y-BOCS. The mean pre- and post-treatment values 6 SD were 22.7±4.3 vs. 14.4±5.3, a decrease of 36.6% according to a paired t-test (p < 0.001).

A paired t-test was used to compare the baseline and post-CBT volumes of OCD patients. We observed that pituitary gland volumes did not change significantly after sixteen weeks of treatment (p > 0.05), with mean values of 0.54±0.29 cm3 vs. 0.56±0.32 cm3 (p > 0.05). Neither did we find any correlations between pituitary gland volume change and the other parameters (p > 0.05).

This is the first study to have measured structural alterations in the pituitary gland of OCD patients who underwent CBT. In fact, to date, very few studies have been conducted about the effects of treatment modalities on structural alterations in OCD patient pituitary glands. Previously, we examined morphometric changes in the thalamus and OFC of OCD patients who underwent a CBT program.11 In that study, we found that OCD patients had greater left and right thalamus volumes and smaller left and right OFC volumes compared to those of healthy controls at baseline. When comparing patient baseline volumes with post-treatment volumes, we observed that the thalamus volumes significantly decreased on both sides by the end of the study period and that left side OFC volumes significantly increased, suggesting that CBT might volumetrically affect key brain regions involved in the neuroanatomy of OCD. However, in the present study, we found no morphometric changes in the pituitary gland after a structured CBT program. CBT seems to be an effective way to reduce stress and enhance quality of life, because it helps patients regulate stress.25 This stress reduction could have affected pituitary volumes. The fact that after CBT, OCD patients experienced a volumetric change in the OFC and thalamus but not in the pituitary gland leads us to consider that the neuroplasticity achieved through psychotherapy does not work similarly for each part of the brain. Thus, we also performed a study to examine the effects of anti-obsessional drugs on pituitary gland volumes in OCD patients,10 in which we found the pituitary volumes were significantly smaller in OCD patients than healthy controls at baseline and that the pituitary volume significantly increased after twelve weeks of treatment. However, we cannot attribute the pituitary volume change to the improving effects of the treatment modalities because similar improving effects of anti-obsessional treatment and CBT might result in different outcomes, as supported by the results of Hoexter et al.6 who showed that the mean gray matter volume was significantly greater in a fluoxetine-treated group than a CBT-treated group. Based on this, we can speculate that psychopharmacological treatment may directly affect pituitary volumes. Likewise, our previous study11 revealed that thalamus volumes reduced significantly over the treatment period with no change in OFC volumes. However, it has been proposed that CBT-related stress reduction lowered cortisol values, and lower levels of cortisol might be associated with smaller pituitary gland volumes.26,27 Thus, we might expect to find no pituitary gland volume increase outside of drug treatment. Consequently, it seems that different treatment modalities affect the brain in different ways.

Our study has some limitations. First, morphometric analyses were performed with a manual edge-tracing method, for which we used a semi-automated program. This method can be biased, and can be accepted as a limitation. Second, the sample size could be considered another study limitation, although it should be taken into account that it is very difficult to maintain a regular CBT program for such a group of patients. Third, as mentioned in our previous studies on the same group of patients, we had no CBT control group to compare with the treatment group results. Fourth, we performed two scans for OCD patients, while healthy controls only underwent one scan at baseline. Finally, there were session compliance problems with certain patients. This might have affected the results, although with minimal effect.

Taken together, these results reveal initial evidence about the lack of pituitary gland volumetric change in OCD patients after a course of CBT. However, it is clear that future studies with a larger sample size are required.