Since 2013, when the proposed diagnostic criteria for hypersexual disorder were not included in the DSM-5,1 an increasing number of studies have aimed to better investigate individuals who seek treatment for excessive sexual behaviors (ESB) in an attempt to overcome the controversial issues surrounding the explanatory models of ESB. Studies indicate that the main alteration in individuals with ESB is impulsivity,2,3 which supports the diagnostic criteria of excessive sexual drive in the ICD-10.2,4 Other studies have noted that the main psychopathological changes include developing a compulsion to deal with anxiety, similar to the obsessive-compulsive disorder (OCD) mechanism,5,6 which favors the current proposed diagnostic criteria for it in the ICD-11 as a compulsive sexual behavior disorder.7 Some data support the idea of ESB functioning similarly to addiction,8 which involves both impulsivity and compulsivity influences, favoring the diagnostic criteria for sexual addiction.9 The new hypersexual disorder criteria were conceptualized based on animal studies in which the interaction of alterations of brain monoamine metabolism and testosterone receptors resulted in a hyperactivation of sexual desire,10 which is supported by new studies.11 Despite the differences, all theories of ESB note that, beyond presenting excessive and repetitive sexual thoughts, urges, and behaviors within a specific time frame, these individuals are reporting distress due to the symptoms and experiencing negative outcomes in the main areas of life, such as work, health, and relationships.

Some data suggest that experiencing anxiety, depression, or anger may impact sexual decision making in negative ways.28 Conversely, other studies have found that some people experiencing negative mood states may make decisions to avert risk.29 Regarding sexual risk taking, these data would suggest that individuals experiencing depression or anxiety would be less likely to engage in sexual risk behavior. However, Mustanski 28 found that increases in anxiety were related to more sexual risk taking in some gay and bisexual men and hypothesized that the arousal components of anxiety may be linked to feelings of excitement that might potentiate risky behavior.

While a relevant body of studies on ESB has been conducted in the United States, empirical data about ESB in Brazil and other parts of the world are very limited, compromising the generalization of knowledge, since sexual behavior is related to cultural variations. There is a particular scarcity of studies about the impact of ESB and negative mood on HIV risk behavior in treatment-seeking samples.

This paper presents data from a study conducted at the Ambulatório de Impulso Sexual Excessivo e Prevençao de Desfechos Negativos Associados ao Comportamento Sexual (AISEP), Instituto de Psiquiatria (IPq), Hospital das Clínicas, Faculdade de Medicina, Universidade de Sao Paulo (USP). Participants were recruited through advertisements in the institution and the nearby community via several media outlets, such as radio, magazines, and journals. The first wave of recruitment targeted participants with ESB symptoms, and those who sought treatment for ESB were eligible for the study if they were classified as having an excessive sexual drive based on ICD-10 criterion F52.7, which means that they complain of an excessive sexual drive that often leads to ESB,4 and a sex addiction based on Goodman's criteria, which means that there is a maladaptive ESB leading to clinical impairment or distress manifested in the same 12-month period by three or more of the following: tolerance (escalating sexual behavior); withdrawal (physical and/or psychological symptoms, such as experiencing abstinence); frequent sexual behavior; unsuccessful control; wasting time in preparation for sexual activity; reduced social or occupational activities; and continuance despite negative outcomes.9 A second wave of recruitment targeted participants without ESB symptoms. Individuals who sought participation as controls were eligible if they did not meet criteria for excessive sexual drive based on the ICD-10 criterion F52.7 or for a sex addiction based on Goodman's criteria. In addition, participants had to be 18 years of age or older, literate, and had to have lived in Brazil for the last 10 years. Exclusion criteria for the study included a diagnosis of any of the following disorders: paraphilias (ICD-10 F65), gender identity disorder (ICD-10 F64), schizophrenia, schizotypal and delusional disorders (ICD-10 F20-F29), current manic or hypomanic episode (F 30.0, F31.0, and F 31.1, F 31.2), and other mental disorders due to brain dysfunction or injury or physical disease (ICD-10 F0.6).

All participants provided informed consent and completed a one-time 2-hour assessment that consisted of standardized self-response measures and a psychiatric assessment. Participants completed the measures on their own using a paper and pencil version. Research assistants provided an overview of the self-report measures and gathered sociodemographic data. A psychiatrist conducted the clinical interview to investigate eligibility criteria. Controls received financial support for transportation. Treatment was offered to those with ESB. This study was reviewed and approved by the ethics committee of the Hospital das Clínicas, Faculdade de Medicina, USP.

The SCS was developed to evaluate trends of recurring sexual cognitions and compulsivity.30 The scale consists of 10 statements (e.g., ''My sexual thoughts and behaviors are causing problems in my life.'') that are rated on a four-point scale from 1 = not at all like me, to 4 = very much like me. It is a widely used measure of ESB. The Brazilian version has been shown to have good reliability (Cronbach's alpha of 0.95).31

A Sexual Behavior Risk Assessment was developed by the first author of this paper based on previous research 34,35 to collect information on sexual behavior with main and casual partners, including the monthly frequency of anal and vaginal intercourse, condom use, and number of casual partners. The Sexual Behavior Risk Assessment was designed as a self-report questionnaire to assess sexual risk behavior in the prior six months This questionnaire was piloted with 20 individuals to check semantic and content issues and had a Cronbach's alpha of 83.35%. It also included complementary items about engaging in sex under the influence of alcohol and drugs.

Statistical analyses were performed using STATA version 10 with a significance level of p < 0.05. Descriptive statistics are presented as proportions for categorical variables and means and standard deviations for continuous variables. Group comparisons were made using chi-square tests or odds ratios and 95% confidence interval (95%CI) for categorical variables, and t-tests for continuous variables. 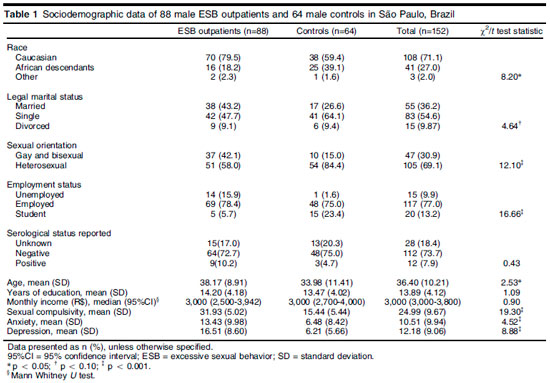 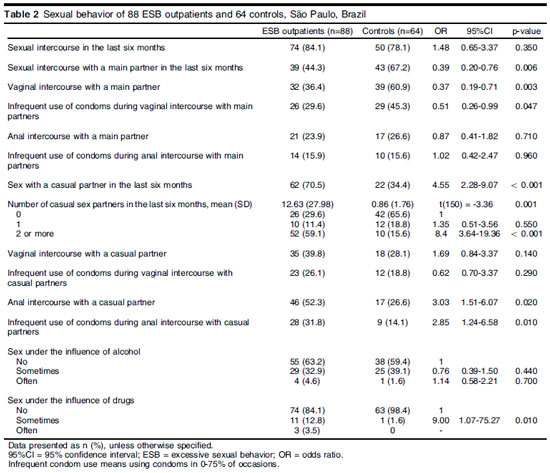 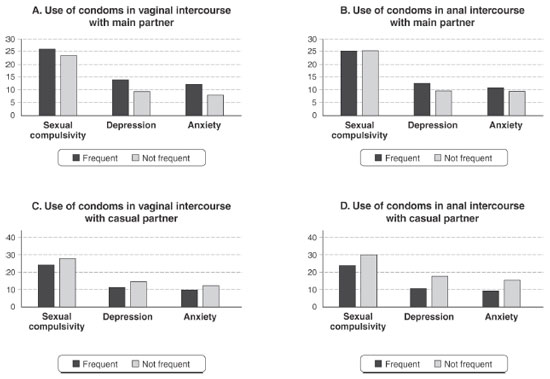 It is important to point out that 16% of the ESB outpatients and 22% of the controls did not engage in sexual intercourse with partners in the last six months. Therefore, the analysis of sexual risk behavior did not account for the whole sample and may have compromised its statistical power to detect differences. It is likely that this is the reason why there were no statistically significant differences among the comparisons between the groups in terms of frequency of vaginal intercourse and condom-less vaginal intercourse with casual partners, even though ESB outpatients, particularly straight men, reported more of these behaviors than controls.

A different pattern of psychopathological manifestation emerged from the analysis of sexual risk behavior with main and casual partners. Of great concern, those reporting infrequent condom use with casual partners presented higher psychopathological scores, particularly when engaging in anal intercourse. These findings are consistent with studies that report a direct effect of affect (depression, anxiety)28,37 and SC17,30 on HIV risk behavior. Accordingly, anxiety may be associated with sexual risk taking, particularly when considering the anxiety transfer theory, in which anxiety and sexual arousal share some components, and some individuals activate sexual arousal to alleviate anxiety symptoms,38 thus becoming more prone to sexual risk taking.28 Depression may also contribute to the activation of sexual behavior,25 which, in turn, is particularly evident when occurring simultaneously with higher SC.39 Moreover, several studies have reported increased activation of sexual behavior in individuals with ESB,40 which is highly correlated with SC. Those presenting greater sexual activation of sexual behavior usually take more risks with HIV transmission.26,28 Therefore, SC seems to have a particular effect on sexual risk behavior, since it predicted condomless anal intercourse with casual partners in our study. Depression and anxiety did not maintain an association with risk behavior in the logistic regression. This could be because they are correlated with SC and may play an indirect role in sexual risk behavior, for example, increasing SC severity. Our data agree with previous population studies on men who have sex with men (MSM)17 and with clinical studies on HIV,21 where SC predicted risky sexual behaviors.

Our data have implications for public health, clinicians, and research. The correlation between anxiety, depression, and SC and their associations with condomless anal intercourse with casual partners support recent studies proposing that HIV risk behavior may be better explained by a syndemic conceptualization, meaning that the risk of acquiring a condition results more from the interaction of several risk factors than the independent effect of individual factors.22 These data are very important for public health, considering they are related to men of all sexual identities in a psychiatric clinical setting. The correlation between these psychopathological factors is also concerning for clinical purposes, since it increases severity and makes treatment more challenging,41 particularly considering that such populations present treatment adherence problems. Finally, the correlation between the psychopathological symptoms (anxiety, depression, and SC) contributes to research in the field, because it supports one hypersexual disorder criterion: "repetitively engaging in these sexual fantasies, urges, and behavior in response to dysphoric mood states (e.g., anxiety, depression, boredom, irritability).'' The increasing sexual activation particularly associated with these mood symptoms points to the relevance of future research on the mechanisms of sexual desire and arousal in individuals with ESB to improve understanding of the main psychopathological and pathophysiological factors involved.

Our study is based on a clinical convenience sample, which resulted after some individuals who contacted us did not continue the screening process and, thus, we were unable to gather data on them. Those who finished the screening process were included, provided they were literate. These aspects prevent generalization of our data. Unfortunately, there are a few sociodemographic differences among the ESB outpatients and the controls. Specifically, it would be better if we had more balance in the distribution of sexual orientation among the groups, since gay and bisexual men usually report more anxiety, depression, and sexual intercourse.17 Moreover, we adjusted the logistic regression on sexual risk behavior for age, race, legal marital status, serological status, and sexual orientation to avoid confounding effects. Another limitation of this study is not having investigated childhood adversity. Hyper-sexual outpatients report more childhood adversity, which is related to depressive symptoms,42 and both factors may increase the chances of sexual risk behavior. To the best of our knowledge, this is the first study on SC, negative mood, and sexual risk behavior in a psychiatric clinical setting that also includes heterosexual men. Our data emphasize the relevance of investigating SC, anxiety, and depression in individuals seeking ESB treatment, since addressing these psychopathological issues could help prevent HIV transmission.

15. Semple SJ, Strathdee SA, Zians J, Patterson TL. Factors associated with sex in the context of methamphetamine use in different sexual venues among HIV-positive men who have sex with men. BMC Public Health. 2010;10:178.